Skip to content
IT’S SUMMER AND it’s the perfect time to sweat and get back into shape after the repercussions of hibernating last winter. If you’re like me, who’s finding the solo ride on the treadmill a bit passe for my liking, then perhaps something like a Zumba class can bring you the dynamics and group energy that you need in the gym. Last week, I had the pleasure (and pressure) of working out at Ramah Fitness Studio, an up and coming haven for women who wants to take on Zumba, Yoga, Pilates and Belly Dancing (among others).  Yes, you read that right, Belly Dancing! It’s been a while since I’ve worked out and trying out something new such as Zumba, became an incentive for me to go back in the gym (Heaven knows I need it!).
The Ramah Fitness Studio is modest in size with a reception, changing room, bathroom and a full-mirrored studio that can probably accommodate 10-15 participants per class. I particularly loved the stenciled quotes all over the place, making sure that everyone feels a sense of well-being and motivation as they go along with their classes.
I was lucky enough to meet the owner of the establishment, Ms. Shada AlDahash, who said that she was inspired to put up the Ramah Fitness Studio after her training in Yoga helped alleviate her back pain. She also said that she wanted something different from the usual gyms in the city that were crowded with equipment and lacked the feeling of camaraderie with its participants.
In Ramah Fitness Studio, she says, “they treat each other like family.” And true enough, I felt it too when I was there.
First of all, I was initially there to try out the Zumba class only. I have never done Zumba in my life so I decided to do a little research before going there. Long research cut short, Zumba is essentially a dance-fitness-party — where you dance and follow the instructors’ steps without it feeling like an actual aerobic exercise and more of like partying it up in a dance club. They use the latest pop music to get you in the mood and the energy of the instructress, Ms. Heba, was electrifying. We were seven in the class and I guess she just assumed that I was not a beginner and started the class right away. Thanks to my background in dancing, I was able to reasonably catch up with the steps. Once I got the hang of it, I began to enjoy the atmosphere and the activity (despite sweating profusely) in the next 45 minutes. Afterwards, I approached her and thanked her for her awesome energy in leading the class.
As I was getting ready to change in the other room (and catching my breath at the same time), the next class (the Yoga class) was about to start. One of the ladies in the room with me suddenly asked me to join them. I said no at first because A) I only planned on trying out the Zumba and B) I was a bit spent after the Zumba and I was not sure if I can handle another exercise class. But then I thought, Yoga is about being “zen” and “centered” right? So that may help me cool down in a relaxing way… (not exactly as I had imagined later on, hahaha!). The kind lady kept inviting me despite my initial decline, and she even said, “Don’t worry, the instructress is my friend. Please join us.” She gave me a mat and a yoga block right away and I eventually found it rude to not go ahead with it.
I’ve experienced Yoga around five years ago, but never really pursued it. So this time around, instead of expecting zen-like positions, it was actually a struggle for me. I’ve always found myself to be a flexible person (I can make my fingertips reach my toes without bending my knees and can do the ‘indian sit’ fairly well), but this yoga class had me sweating even more, and balancing even more. A lot of my bones actually cracked during the stretching segments, proof that I haven’t been exercising that much in the last six months. But towards the end, we spent around 10-15 minutes meditating and our instructress had a really soothing tone and manner about her that we did end up ‘inhaling the positive vibes and exhaling the stress and negativity.’
Interestingly enough, I didn’t feel like collapsing after both the Zumba and Yoga classes. I felt internally refreshed and externally rejuvenated. The kindness of everyone there helped too. I am definitely recommending the Ramah Fitness Studio to the ladies out there who wants to dance out and work out in a cozy but fun environment. A very cordial attendant named Haifa, will greet you upon entry (yes, she speaks good English).
Their website, http://ramahfitness.com is pretty solid in information regarding their location, classes, instructors and prices. But to give you a preview, here are their rates:
Zumba classes are at 90SR per visit / 700SR for 10 visits / 1300SR for 20 visits [Valid for two months]
Yoga-Pilates classes are at 90SR per visit / 800SR for 10 visits / 1500SR for 20 visits [Valid for two months]
This is the location map of their studio (located just beside McDonald’s Takhasussi): 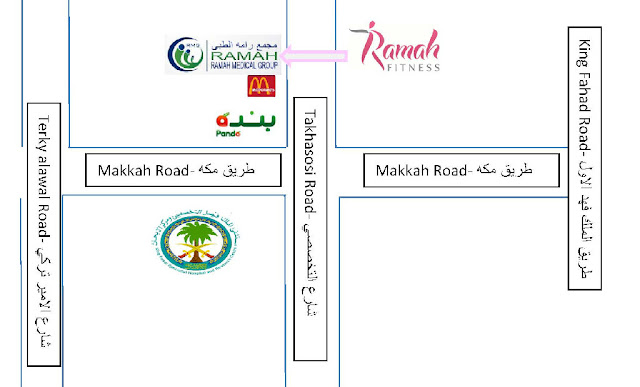 So shall I be seeing you there as one of dance mates in Zumba? Or in the Belly Dancing class? I hope so! 😉
Cheers!

By The Pink Tarha